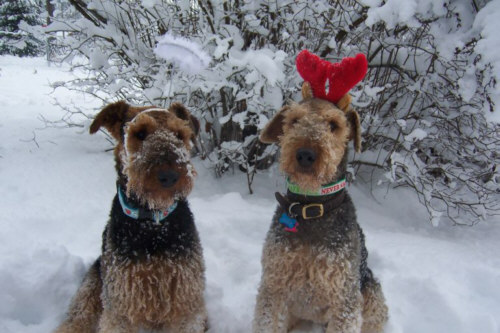 Roxy on the left with Jack on the right posing for a picture after a romp in the snow!

Jack is a 3 year old male whose elderly owner passed away and the children surrendered him to the local humane society. Jack was then adopted out by the shelter to a family, but only to be returned because he killed the family's cat. An all breed rescue group was able to get Jack out for Airedale Rescue and Sandy Pesota drove from Southern CA and picked him up. Jack then went to a foster home with a lady who had an older female Airedale who did not appreciate Jack's playfulness. Jack was returned to Sandy a couple of weeks later. Rusty LaFrance called me and asked if I was interested in Jack (we had already submitted an application) and the rest is history.

I called Sandy immediately and we arranged to meet a couple days later (a 4 1/2 hour drive for each of us one way). I could hardly wait for the trip! Jack came home with me to his forever home in SF Bay Area to live with his new Airedale sister Roxy who is 2 and his new Pug brother Scout who is 6. Roxy and Jack are best of buddies now.

We have since moved to Idaho where they have a huge backyard to run and play, chase each other, do zoomies, chase and bark at the squirrels, or lie under the apple tree. Jack is a very special and sweet boy. We have had him over 5 months now and his personality is truly shining now. He has learned many new things; sit, shake, stay, leave it, no bark (hee hee). Jack also loves the snow we have now! He sleeps on a dog bed on my side of the bed and now that it has turned cold, he has a blankie that I tuck him in with. He has indeed found his forever home with us and we can't imagine life without Jack.

Thank you Airedale Rescue for our sweet boy.