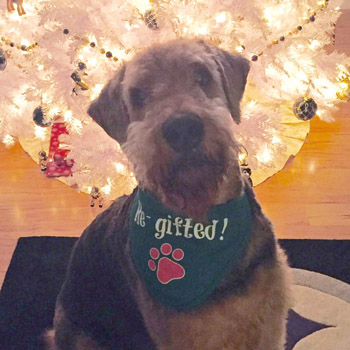 What a difference a year makes. Two days before Christmas 2014, I rescued a 110lb, 8 year old Airedale “Terror” named Boots. His previous owner was 86 with dementia, and she was forced to hand him over to animal control. He bit two people and was quarantined with only 5 days left before he would be euthanized.   Linda Tegarden from the Airedale Terrier rescue group called me, we met at the San Diego Human Society and I decided to take on the challenge and rescue Boots. I have always had Airedales and am very familiar with the breed and behavior.  Boots was a mess with numerous medical conditions. He had to be sedated just for an exam, as he tried to bite anyone that touched him. Both of his ears and skin were infected, his thyroid 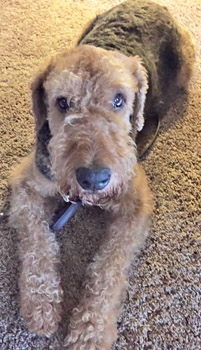 levels were low, and he had a large tumor on his tail.  After a few months of medications, daily baths, tail amputation, and teeth removals he was feeling much better.  The next step was house manners and he was a very mischievous 8 year old. He was obviously allowed to do whatever he wanted, whenever he wanted.

I’m retired Navy and consider myself to be an alpha, and felt that I have definitely met my match. He bit me three times and I also noticed that he was always on guard during our walks. He would lunge at people trying to walk past us, especially males. That made me very nervous. He doesn’t have any strikes left, and I didn’t want animal control to knock on my door. 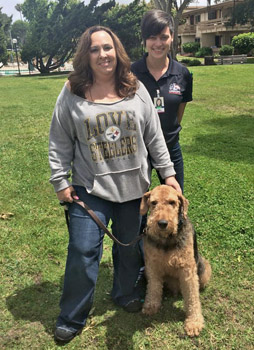 I walked into the vet’s office (Shelter Island Veterinary Hospital) and my vet, Barbara Darnell asked me who was going to train Boots. I replied and said that I am training him. She offered me a free consultation with Lorenzo’s Dog Training Team and at first I declined. Just a few minutes later, the vet tech came in to take him for his blood work. All I could hear was Boots having a vicious temper tantrum. I swallowed my pride and when Barbara walked back into the room, I asked her for the free consultation. When I saw the brochure, I knew it was supposed to happen this way because it had a picture of two Airedales on the front of it.

A week later, Leanna Gregory and Emilio Marotta from Lorenzo’s Dog Training Team arrived at my home to meet Boots.  I was amazed at how calm and well behaved their dogs were and wanted the same for Boots. Boots showed his alpha behavior with Emilio (former Marine) and refused to go to the down position. Boots and I definitely needed their help. Their recommendation was to take Boots for several weeks of training (back to basics). That was really hard for me, but it was the absolute best decision that I have ever done for my dog and for myself. We also went through 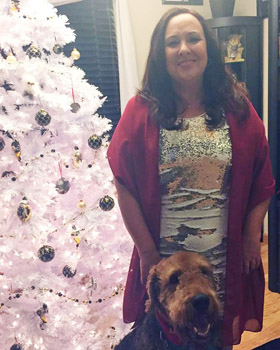 several training sessions together at my home and at the vet’s office during those weeks. Boots was transforming into a well-balanced Airedale that I so desperately knew he could be. He still tried to test me, as an Airedale would, but I was given the correct training techniques that I needed to make the corrections. Leanna Gregory is an amazing teacher. It is a lot of hard work and now I get compliments about how well behaved he is and I am such a proud momma!

It took an entire team of wonderful people to rescue and transform Mr. Boots to be a healthy well behaved Airedale. Thank You!