ART: Who's in charge?

When I first went to dog obedience classes about 25 years ago, the old school of harsh training methods was still in use.  When positive rewards training methods came in, obedience training became more fun for both dog and trainer.  That was followed by clicker training, as we continued to learn about more humane ways of training animals.

I became very interested in the pack theory of dog training in 2000 when reading the book, “The Dog Listener” by Jan Fennell, a dog trainer in England.  Jan had developed her training methods after seeing Monty Roberts working with training horses.  I’d seen Monty work with horses at demonstrations in Florida, and it fascinated me what he could quickly achieve in a such a quiet and gentle way.  Learning about and working with the pack theory I found it easier for me to achieve the results I wanted in training my pack of Airedales.

(For many years I had a personal pack of 6 dogs, consisting of 5 Airedales and 1 miniature poodle, all of which lived in our home.  Additionally I usually had another 2 or 3 rescue Airedales in foster care.   Such a pack provided great opportunity to study and learn canine behavior.)

Currently there is controversy regarding the pack theory, if it truly represents wolf behavior as it is purported to do.   Dog trainer Lee Charles Kelley, in his disagreement with the training methods of Cesar Millan, quotes David Mech, an expert on wolf behavior, when he says, “...real wolf packs don’t have pack leaders.”   To form your own opinion, you would have to decide which of the wolf behavior studies you want to use.  Most times I agree with one well known trainer when he says, “Two dog trainers can’t seem to agree on anything except the fact that a third dog trainer is completely wrong.”  I like to study many methods and choose from each what I feel is acceptable to me. 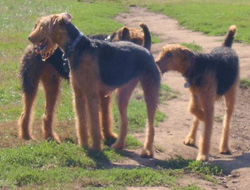 Regardless if we call it pack theory, hierarchy, pecking order, or dominance, it’s been my experience that within a pack of dogs, there is a leader and there are followers.  I’ve further observed that when an Airedale joins a human, if that human doesn’t assume the leadership role, that dog will certainly be willing to step up and take the job.  Mr. Dog will happily decide when and for how long he should bark, if he should come when he’s called, who he will allow on his property...in other words, he’s ready to make the rules and take that leadership position.   Are you the leader?  If you always need to have a reward treat in your hand to get your ‘dale to do as you wish, to come when you call, well you tell me who you think is in charge!

Obedience training teaches you to assume the position of leader.  Being a pack leader means your dog is willing to follow your lead out of respect, not out of fear or intimidation.  Watching a mother ‘dale with her litter of pups, you see that she is loving with them but at the same time, demands respect.  She is their source of all resources, those things that are important to the pups.  She provides their food, decides when they play and steps in to correct when they go too far.  As the pack leader, you are the source and owner of all your pack’s resources.  You provide the food, water and toys, as well as the exercise, and decide when it is playtime.  You decide if they are allowed on your furniture, to countersurf, to fight with other dogs.  They trust you to make the right decisions for them at a time of trouble.  Jan Fennell vividly illustrates this when she tells of a dangerous situation she faced along with her pack of dogs.  Loading all six dogs in her car, she drove out to a favorite spot where she let the dogs run and play in the countryside.  On arrival, and with Jan’s approval the pack bounded out of the car, running off to explore the nearby trees and stream, enjoying the freedom.  The dogs were out of sight when she heard the first dog scream.  Running to investigate Jan discovered the dogs were under attack by swarms of bees.  Suddenly she was also under attack.  Quickly retreating and running to the car, the dogs running with her, all scrambled into the car and raced away from the attack.  As they drove, more and more of the attacking bees were left behind, blowing out the car’s open windows as Jan drove directly to her vet’s office. After the dogs had been treated for their wounds, her vet asked how in the world she had gathered all the dogs back into the car, expecting that when under attack the dogs would have taken off in all directions.  It was then that she realized the dogs had not run off, but had stayed with her, and all reached the car together.  The realization set in that because they knew she was the pack leader, and would make the right decisions for the pack, they had followed her lead without question. In pack theory we are taught that the pack leader makes the decisions when trouble arises, and the rest of the pack will follow.

A few weeks ago I had a rare experience with my Airedale Shannon while doing a home check for a prospective rescue adoption.  Entering the house we discovered a resident pair of large white cats that had obviously decided they did not want Shannon in their territory and prepared to attack her. While the cat’s owner stood frozen in complete shock, the cats quickly advanced, one at a time, toward Shannon, who was standing with me.  Each time a cat advanced to attack, I stepped forward and pushed it back with my foot, stopping each advance.  After each cat had made several advances the owner finally recovered enough to intercede and remove her cats from the room.  This was an absolute first for me, and I was amazed at how controlled Shannon remained during the assault.   Shannon, a spirited 57 pound alpha Airedale, could have retaliated, making it a terrible situation, but thankfully she held back and she trusted me to handle it.  I felt really good that she had respected me as her pack leader to handle the situation during this assault.  Wow, I was so very proud of my Airedale!

If you’re interested in learning more about being the pack leader, I encourage you to investigate various books to find which method best suits your personal comfort in working with your dogs.  Your local library and internet searches could be your first venture into investigating these training methods.  We don’t have room to go into further detail in these articles, but I can give you a brief idea of two of the trainers I’ve mentioned.

In his book, “Be The Pack Leader,”  Cesar Millan lists “Some Basic Dos and Don’t of Discipline -

In her book, “The Dog Listener,” author Jan Fennell describes her personally devised technique,“Amichien Bonding” to achieve her version of pack leadership.  Jan feels pack leadership can be changed, and there are four times that pack leadership is reestablished:

My personal experience has not illustrated all the above points, but I have followed the practice of feeding the alpha dog first.  In my pack, Airedale Rocket assumed the position of alpha dog early in his life, even though he was the youngest.  Tragically we lost Rocket from cancer at 7 years of age.  He was challenged for his leadership position only one time, as he was nearing his end of life.  Airedale Bru, five years older and normally a happily submissive fellow, made a gentle attempt to take over that top position.  There was no fight, and (right or wrong) I gently reinforced Rocket’s position, which Bru accepted.  There was never another attempt.  In fact, we never had a fight in our pack.

Following her first book, that I’ve mentioned above, she also published a follow up book, “The Practical Dog Listener - The 30-Day Path to a Lifelong Understanding of Your Dog.”  This book gives you a review of the principals she described in her first book, plus a day-by-day plan in incorporating her training plans for you and your dog.

Jan Fennell’s remarkable work dealing with damaged and delinquent dogs has gained her an admiring audience in her native England.  Her books have become international best sellers.  Jan frequently contributes to television and BBC radio programs. If you want to learn more about this trainer, I suggest you go to her website at http://www.janfennellthedoglistener.com.

Being the pack leader with your dogs makes for a wonderful partnership.  Your dog not only loves you, but respects you and is willing and happy to follow your lead.  Have I sparked your interest?  I hope so!

ART Newsletter Copyright 2009 by Sally Schnellmann and National Airedale Rescue.  Reproduction in whole or in part is forbidden without the publisher's written permission.
Joomla SEF URLs by Artio