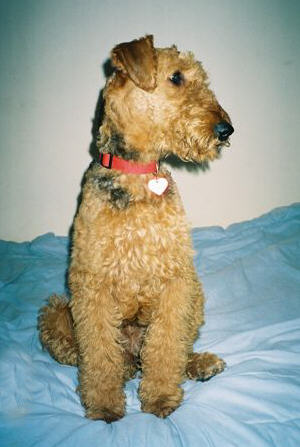 Miss Annie (not yet two years old) was dropped off at a shelter by her owner, who said the family couldn't keep her because she had been diagnosed with hip dysplasia. One week later, ATRVA [Airedale Terrier Rescue of Virginia] was contacted.

I don't believe in love at first sight, but while she was at the vet's being evaluated (diagnosis-"shallow sockets") & after, when she was being fostered by a friend, I couldn't stop wanting to take her home. I thought I had found a great home for her here in Virginia, but when we started discussing her hips (the condition of which I felt I had to disclose), the couple decided they didn't want to risk having problems in the future & declined to proceed with the adoption.

Another applicant was interested despite the potential for hip problems, but she was an eleven hour drive away-too far for me to do adequate follow-up (yes, there is a perfectly capable volunteer in that area, but never mind....).

The foster mom was getting ready to move, so I thought it would be a good idea to see how she did with my crew (three year old Scot & thirteen year old Jazzy-Ruza). They all walked beautifully together, so we headed for the back yard-within minutes, under Ruza's supervision, Scot & Annie were playing tag.

When we first went indoors at my house, they played "bite-face" for 45 minutes-it is still their favorite game!

Within the first week, Annie had taught my two to countersurf while I was trying to teach her not to. She has now learned sit & down & is trying very hard not to jump up on people. She is very respectful of Miss Ruza; she adores Scot & thinks he is her chew toy! She needs reining in every once in a while, but learns very quickly. She is energetic, affectionate & very full of her little Airedale self!

We'll deal with any health issues as they come up, the way we would with any dog-Annie has found her forever home. 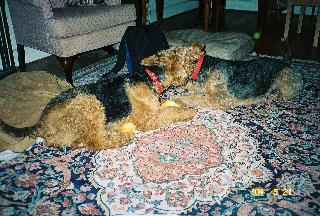