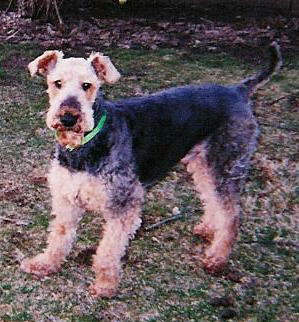 Casey was found along with another Airedale tied up overnight outside a shelter in Ohio. An ATRA volunteer was called and both were brought into Airedale rescue. I volunteered to foster him. Casey had eye surgery and repairs to his teeth which the vet said could have been from injuries caused by being kicked at a young age. We thought he was about two years old by this time. Well, the little guy just managed to worm his way into our hearts and the foster plan turned into an adoption in no time.

Casey is the CRITTER GITTER in our home. He sniffs and snuffles and runs and barks and does everything he can to catch any critter in the back yard. He's not very fast so luckily there have been no "catches" to dispose of. He loves to snooze on the coach in front of the fireplace or on the floor in the sun shining in windows. He likes to chew bones and will go to any lengths to capture a kleenex to chow down.

Case-a-roo-boo is now four years old and he looks like a puppy still, thanks to the black coloring on of his body and especially on his nose. His black nose is special, just like he is!