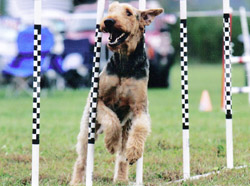 Angus was an owner surrender.  Just not enough time for the dog, new marriage, etc.  They had spent money on sending him away to be “obedience” trained.  I got the $300 receipt in the packet of stuff when I picked him up.  I found out later that the $300 only served to take away all of his self confidence and trust.  A person that works in the Canine College he was sent to said that the dogs were literally vomiting and defecating when the “trainers” approached them.

We had Angus for several weeks as a foster and I placed him in an experienced home with another Airedale and children.  It did not work.  Angus ate a bed, counter surfed terribly, knocked the kids down flights of steps and the other dog did not like him.  I asked to foster him again.

My older dog at the time “told” the doggy chiropractor/communicator that he really liked Angus and hoped that he could stay.  You see he is really a chicken at heart and his older brother had just passed away and he needed a protector.  When I told my husband of my dog’s request to keep Angus, he agreed that we should.  Angus to this day lacks confidence, is afraid of storms, loud noises and men coming into our home.  Angus is even still very tentative to go to the bathroom.  It appears that he was probably beat for this behavior at one time.

After having Angus in our family for 7 years he is the protector of everyone in our “pack”.  He is also the low on the totem pole in the dog world in our house.  He fears foster dogs coming in as if they will replace him.  He is as rough of a dog as they come so I added onto his name that he came with of Angus, Ruff Stuff Angus which is an AC/DC song.  He loves us more than himself.  I couldn’t imagine life without him actually.

Angus wears his heart on his sleeve as they say.  He is the most loyal Airedale I've ever met.  He will protect his home, family, yard, whenever he feels he needs to.  Angus learned agility pretty quickly but he does best just training.  He lacks confidence to be a "show dog".  He did show for 3 years but ended up being the clown in the ring.