Patrick has experience.  He was too much for his first family.  Too smart, too rough, too inquisitive.  Next were two different foster homes, short lived.  Back to his original home base and then to a home with one child.  Then he found himself at the local dog shelter.  From there he went to live with a couple and their two female Airedales.  Two weeks, too many.  Had to go.

I tried him with a very experienced friend after I got him as a foster.  Three days, too much.  Patrick is the most curious, most devious, most insistent dog I’ve ever known.  He knows what he wants and how to get it.  They say dogs can’t plan, don’t remember, don’t rationalize. Ha!!!! Not Patrick.  He is liked by almost every dog he meets; he wins people over to pet him by making eye contact, and wagging his tail. When they approach to pet him, oops, I’m too busy to be bothered is what he says and turns away.  Unless….. you have something to eat or drink. At that point Patrick is the best friend you’ll every have.  Don’t turn your back though, your food or drink will be gone.  Counter surf, ha!!! He’s got a 10 foot reach and uses those paws like they are mechanical fingers.  Fences, they won’t keep Patrick in, he’s got the world to explore.  But he will come running back to the word cookie!!!  When Patrick goes to bed, he’s in bed.  He is usually between my husband an me upside down with feet in the air.  He plays hard and he sleeps hard.

Patrick is 24/7.  If he was my first Airedale I’d have to admit, that would have been my last Airedale. (he actually is my 6th). Terrier people just shake their head and say, that’s too much terrier for me.  I say, Wow, one of him is enough but my gosh we love him to pieces.  He has taught me patience and actually more love for the breed which I didn’t think was possible.

Patrick is a super smart Airedale.  He can be taught most anything in a matter of minutes.  He also came to me knowing a ton of stuff that he had learned in his many other homes.  I haven't met another dog that doesn't like Patrick.  He's very likable plus being intelligent. 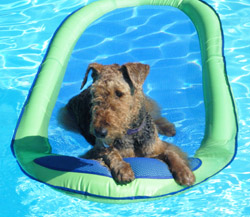 Patrick shows in agility.  He got to the highest class fairly quick.  At agility he's awesome but he is so ADD that for the minute in the ring he can't seem to focus on what we are doing. We are the 7th home for him so it's really amazing where he came from and what he does now.

Patrick has his AXJ, AX and OF titles in AKC.  He's also got titles in NADAC of OAC, NC, NT, NW.