On August 24th, barely daring to hope, Jane M. of Red Oak, TX., sent a note to me in Austin,TX. Her question..."Where did the 'dale listed on Petfinder as "Ella" come from? She had lost her Airedale girl on the 4th of July and all efforts to find her had failed. Reports of sightings had dwindled down to nothing. The way the old girl was squatting to potty in one of the pictures reminded Jane of her 'dale, Jessie, who has a bladder tumor for which she was taking medication.

It was close to 9 p.m. when I got her e-mail. Seems she had been at work and someone had a radio playing on station KRLD. Her ears perked up when she heard an announcement about the KRLD Pet of the Week...an Airedale named Maggie. Jane dared to hope that someone had found Jessie, turned her in to a shelter and named her Maggie. She looked up Maggie on Petfinder only to discover that Maggie was an Airedale mix, cute--but not her Jessie. Scrolling through the other postings, though, she saw "Ella."

Ella had come to TART through a shelter in Cedar Hill (about 15 miles from Red Oak) where she was picked up as a stray. She was clearly elderly and emaciated but very sweet. TART volunteer, Tom Bambrick, pulled her out of the shelter and delivered her to the nurturing hands of TART volunteer, Melissa Sibley who has a kennel in Cedar Hill. Ella was promptly delivered to the vet who declined to give her any vaccines except bordatella due to her tenuous condition. A few days later Ella came to Becky's kennel and vetted more intensively--the bladder tumor was discovered and she was started on Piroxicam--the same medication Jessie was prescribed.

Ella was weak but determined. She would eat with gusto and, when a foster home with two large Maine Coon cats was set up, she would take great interest in the kitties but she never bothered them. Her foster mom, Marcia Erickson, discovered that Ella adored both cantaloupe and her cushy dog bed and she welcomed all visitors to the home. She was clearly housetrained. Ella was clear about telling Marcia when she wanted a walk through the comfy Rosedale neighborhood in central Austin. The neighbors welcomed this old girl who was gaining strength by the hour and her coquettish glances were duly noticed.....she is such a flirt.

Jane and I talked at length about the 'dale in our care. I assured her that in the morning Becky would use the name "Jessie" with Ella to see how she responded. Through the evening, Jane sent numerous posts providing information to help identify her Jessie. Jessie had a mole; Jessie had experienced hematomas in her ears leaving them thickened......everything pointed to Ella being her Jessie. Jane's sister sent some pix of Jessie taken within the past two years.......clearly the grinning girl in the pictures looked like Ella. 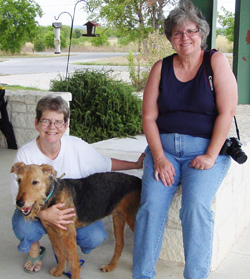 In the morning all doubt was erased when Ella began a happy dance when Becky addressed her as "Jessie." Jessie's family was notified and before the sun set they had driven to Georgetown to get their beloved girl. It was a joyous reunion with Jessie nearly jumping into her mom's lap....not bad for an old girl.

So there have been lots of smiles in central Texas for the past 24 hours and one of the sweetest smiles is Jessie's.........what a girl. Oh...Jessie's mom has offered to help TART in the future. Not bad!

*I have contacted KRLD about the story. They may do a story on the reunion.*

**Jessie was reported to NAR as lost on July 5 but when we learned of her 3 weeks later in a different town we did not make the connection.**