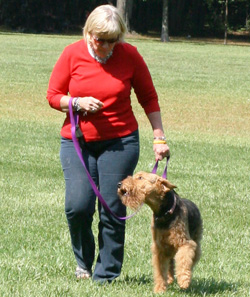 When I first started to take my dogs to obedience classes back in the late 1970’s, I was taught to show the dog how to do what you wanted them to do and then use the choke collar to give them a correction once they learned it but didn’t do it right. By the late 1980’s I was assisting the instructor with classes and by then my Airedale had become a demonstration dog. I continued working with obedience classes through the mid 1990s and had helped with over 20 classes. My dog could do everything I asked of her, but something was missing.

Then two years ago my husband decided he wanted to take our German Shepherd through Shitzhund training. I was interested in the obedience and tracking portions of Shitzhund, so I took my Airedale, Alice, along to learn. We found a retired K-9 police officer as our instructor and he was really big on positive reinforcement training. At that time, Alice was six years old and had already attended basic obedience classes. It didn’t take me long to notice that there was a big difference using positive reinforcement training methods.

What I had noticed through all the years I worked with obedience training was that although my Airedales were quite smart and could learn all the routines, they had no terrier spirit when they did them. My Dusty, and then Alice later on, would come to me on a recall with their tail down, head down looking at the ground and feet just shuffling ever-so-slowly along. The first time I did the recall with Alice after about 4 or 5 weeks of working with positive reinforcement training, I was not prepared for what came next. Alice came bounding to me with her tail up, ears and whiskers blowing in the wind. She almost knocked me over when she got to me! What a BIG difference! 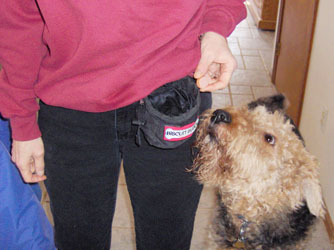 Alice was very interested in the hot dog as I demonstrated the bait bag.

What is positive reinforcement training? It is training where you reward the dog for doing the right thing - not punish the dog for doing it wrong. Our trainer had us get bait bags to clip on our belts (a fanny pack will work also). We cut hotdogs into little circular slivers and filled our bag in preparation for a session. The bag is positioned over your stomach, slightly off to the left. Your right hand held the leash while your left hand held a piece of hot dog. The first few sessions were spent getting the dog to learn to “pay attention.” We just walked around the yard, alternating the speed of our gait and mixing in some sits. Every time the dog was “paying attention,” or did an automatic sit when we stopped, they got a reward - a piece of hot dog. By holding the reward at waist level just off to the left, the dog’s head is positioned right by your side so they are hopefully looking at you and paying attention for your next command. Eventually as the dog gets good at doing a particular task, you can cut back on the rewards. We also had a favorite toy that we brought out of our pocket or belt when the session was over.

As you check out places to take your dog for an obedience class, ask them if they use positive reinforcement methods and watch that terrier spirit blossom!