Teaching your rescue dog to love the crate.

Start by taking a nice piece of roast chicken and setting it inside the crate then lock her out of the crate. Let her sniff and smell it and really want it. She will start pawing at the door. (set it where she can smell it nicely.) After a moment or two say, "Oh well, "sit". Then after she sits nicely for you, open the door and let her have the chicken----see! She will walk in to get it. Just let her walk in, eat it, then walk out.

Then get some more bits of tasty treats and squat down on the floor with her and toss one at a time in for her. As you do it, say, "Crate." Play this game many times.

After about 10 or 12 of these, throw another treat in, but this time, as she turns around, have the door swung closed (not latched). We just want her to see the door, then as she approaches, open it so she can walk right out.

Later in the day (when she is again eager for treats) repeat the step above a few times, but start holding the door closed to the count of 5 as she stands there, then open it so she can walk out. Repeat a number of times.

As you can see, what is happening is that under her own steam she is going in there and is becoming accustomed to seeing the door closed for gradually increasing amounts of time.

Through the day start sticking odds and ends of stuff in there. You will find that she is going to start going in there to check and see if any treasures have been left by the good crate fairy .

Begin putting her food bowl in there with her meal. While she is eating, latch the door, and move out of her ield of vision but come back in about 5 minutes and let her out without fan fare.

Always increase the time in the crate by small increments. If the dog stresses, as someone else mentioned,
wait till she is calm for about a few minutes before opening the crate and fall back to an easier level.

Always be certain she has been pottied and exercised prior to crating.

Go to http:www.kongcompany.com. There you will find a link called "How to Use Kong" . That page has tons of great stuffing ideas for Kongs. You can use a stuffed Kong as a treat to leave with her in the crate. Frankly, my guys never liked Kongs but they do like those sterilized bones you can buy at PetsMart and I stuff those with goodies.

Let me know how it is going and if you need some other ideas.

Oh---since Hank is a real shredder, I never put fabric in his crate. I put clean shredded paper that has been shredded by a real paper shredder and the paper is laser printed stuff so it is clean. Then you can scatter the following bits in there for them to root around for.

Take chicken hot dogs. Slice each one in quarters lengthwise so you have four long skinny strips. Do this with about 4 hot dogs. Then line up the  strips and cut across them about 8-10 times so that each hot dog yields about 40 little bits.

Then spread the bits in a single layer on some paper towel... Pop each batch in the microwave for about a minute or so. The objective is to end up with dry bits. Any fat will be absorbed by the paper towel. Store in a plastic bag in the fridge. Dogs love them, and they keep a long time and are convenient to carry.

Cheryl Silver and the gang in Austin,Tx

And .. from Corally Burmaster ... one of the best clicker trainers around (and an Airedale breeder)

Put him in the crate, click (or say"Yes!) treat him IN the crate and then let him out. 5 seconds, tops. Repeat ten times. End session. Next session (an hour or so later) increase time to 10 seconds, etc. You need to build duration. Whether or not he LIKES the crate is too subjective for you to know. All you really need to know is that he can tolerate longer and longer periods of time in the crate without becoming upset, which means that when you begin you have to let him out of the crate WAY before he even thinks about becoming stressed. When he is up to a minute, close the crate door for a second, click (Yes!) throw the treat in the crate while the door is closed, open the door and let him out. When he is up to five minutes, begin giving him a Kong filled with kibble to play with. And you haven't even begun to go out of sight yet. When you do that you will walk out of the room, click while you are OUT OF THE ROOM, come back in and treat him and let him out.

If you do this thing right, he will jump into the crate on his own so you have to treat him! 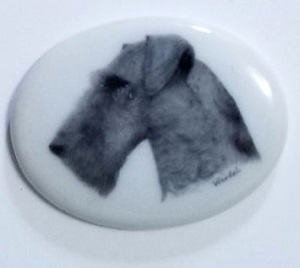